SURABAYA, 21 NOVEMBER 2018: Malaysia and Indonesia’s higher education institutions need to join forces and to go for strategic and high-impact collaborations on research and development programme to produce technology and experts in the field of renewable energy. 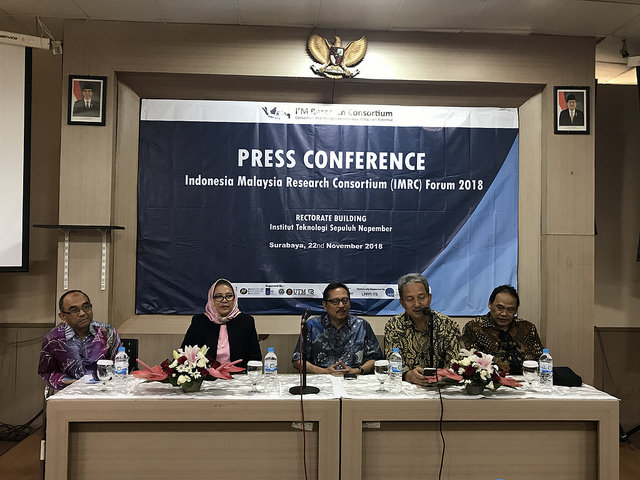 The Ministry of Education through the Malaysia Research University Network (MRUN) supports this initiative fully, as RM1 million has been allocated for UTM to coordinate collaborations between universities in Malaysia and Indonesia under the consortium. Held at Institut Teknologi Sepuluh Nopember (ITS), the seminar is jointly organised by UTM, ITS and Universitas Negeri Malang (UM), and it convenes researchers and faculty members from eight universities in Malaysia and 29 in Indonesia.

The opening ceremony will be held on 22 November 2018, and will be attended by the Director General, Strengthening of Research and Development, Ministry of Research, Technology and Higher Education Indonesia, Dr. Muhammad Dimyati; the Director General of Higher Education, Ministry of Education Malaysia, Datin Paduka Ir. Dr. Siti Hamisah Tapsir; Rector of ITS, Prof. Dr. Ir. Joni Hermana, and Rector of UM, Prof. Dr. Rofi’uddin.

JAKARTA, 2 OCTOBER 2017: HE Minister Dato’Seri Idris Jusoh, the Malaysian Minister of Higher Education (MHE) and HE Minister Mohamad Nasir, the Indonesian Minister of Research, Technology and Higher Education Indonesia, were graduated from the University of Sains Malaysia (USM). Today, it is a special day for both Ministers as they chaired a bilateral meeting of the high level groups consists of policy makers from both Ministries, rectors and vice rectors from the Indonesian and Malaysian famous universities. 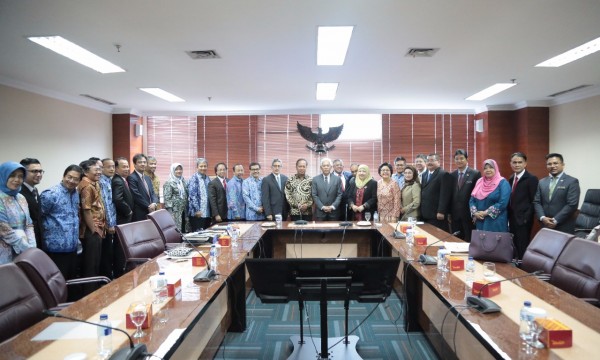 Opening his remarks, HE Minister Nasir welcomed HE Minister Jusoh and his delegation, who conducted a working visit to Indonesia and expressed their expressions in establishing collaboration with the Indonesian society to develop HESTI for both countries. HE Minister Nasir said that since the establishment of MoRTHE in October 2014, there have been lots of programs have been implemented, such as scholarship, joint research and development, and program of ‘KKN Kebangsaan’, that can be collaborated between two Countries.

Moreover, Minister Nasir also mentioned that within his three years of leadership, he has tried to promote more research commercialization as invention cannot be named by innovation, if it cannot be implemented to the society (people and or industries). HE Minister Nasir also mentioned that Indonesia has set up the RIRN (national research agenda in Indonesia, 2017 – 2045), which prioritizes ten areas in the future. Those tenth priority areas are food and agriculture, health and medicine, information and communication technology, energy (renewable and alternative energy), transportation, defense technology, advanced technology (including nanotechnology), maritime, disaster management, social and humanism.

Responding HE Minister Nasir, HE Minister Jusoh expressed his excitement for having opportunity for visiting Indonesia. He also shared recent development in higher education system in Malaysia. He said that Malaysia also concern on ‘’equality and originality’’ (kesetaraan dan kepunyaan) when establishing the collaboration with a Country. Malaysia realizes that establishing ‘’collaboration’’ is much more important than implementing ‘’competition’, nowadays. Therefore, there has been changing in the paradigm shift in Malaysia. He then said that Indonesia and Malaysia have been working together since decades, and by establishing collaboration, together they would be more productive in implementing the higher education programs, collaborative joint research, and other common interest programs. In addition, HE Minister Jusoh also informed the audience, that an Índonesia Malaysia Research Consortium has been established in early 2017, where the University of Technology Malaysia (UTM) and Institut Teknologi Sepuluh November (ITS) Surabaya become the leaders of this consortium. Both leaders from UTM and Prof Joni Hermana then explained the collaboration that has been maintained since 2014, and hope that both Ministries will support such existing collaboration in the future.

In the efforts of accommodating active and excellent initiatives, ideas and programs from both academicians and scientists in both Countries, HE Minister Nasir proposed that an umbrella agreement on higher education development should be developed, so both Indonesian and Malaysian universities could generate all concrete programs following such agreement. Though some of the Indonesian universities and Malaysian universities are now having already their various MoUs, but still in the future, such umbrella Agreement in the Ministerial level is needed, so both steering committees from Indonesia and Malaysia may evaluate and review progress of the collaborative programs in the future. This umbrella Agreement, is hoped to be signed around November this year, and witnessed by both Leaders from Indonesia and Malaysia. 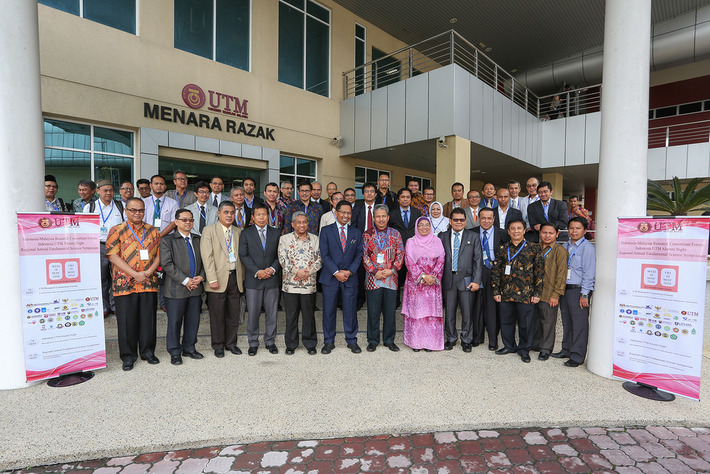 Followed by I’M RC Forum, a research engagement workshop was held in the afternoon. The workshop was chaired by Deputy Vice Chancellor-Research and Innovation of UTM, Prof. Dr. Ahmad Fauzi Ismail. Issues of research collaborations and joint supervision among the Indonesia and Malaysia Intitutions of Higher Learning were discussed. 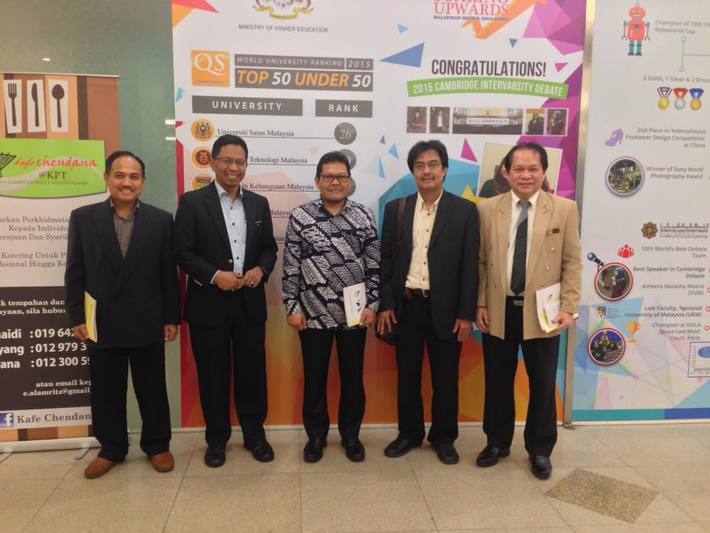 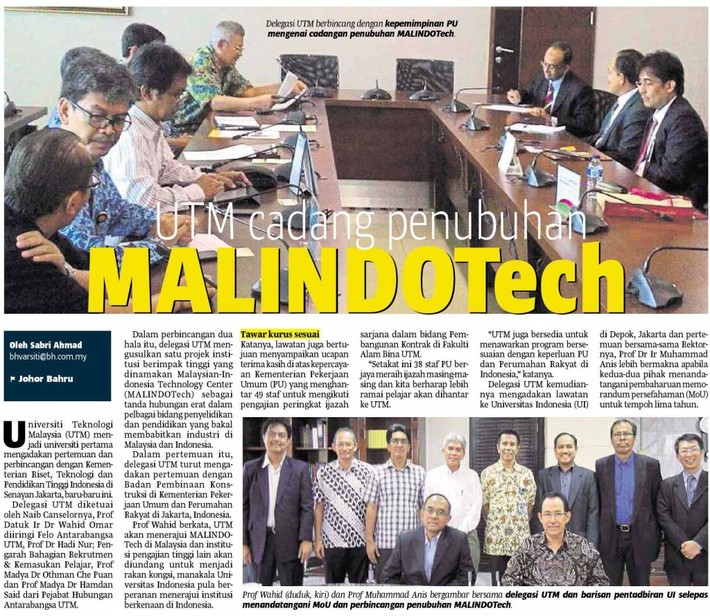 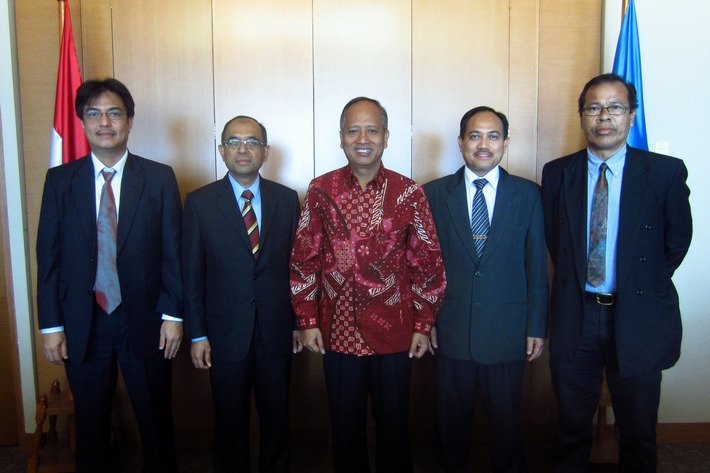